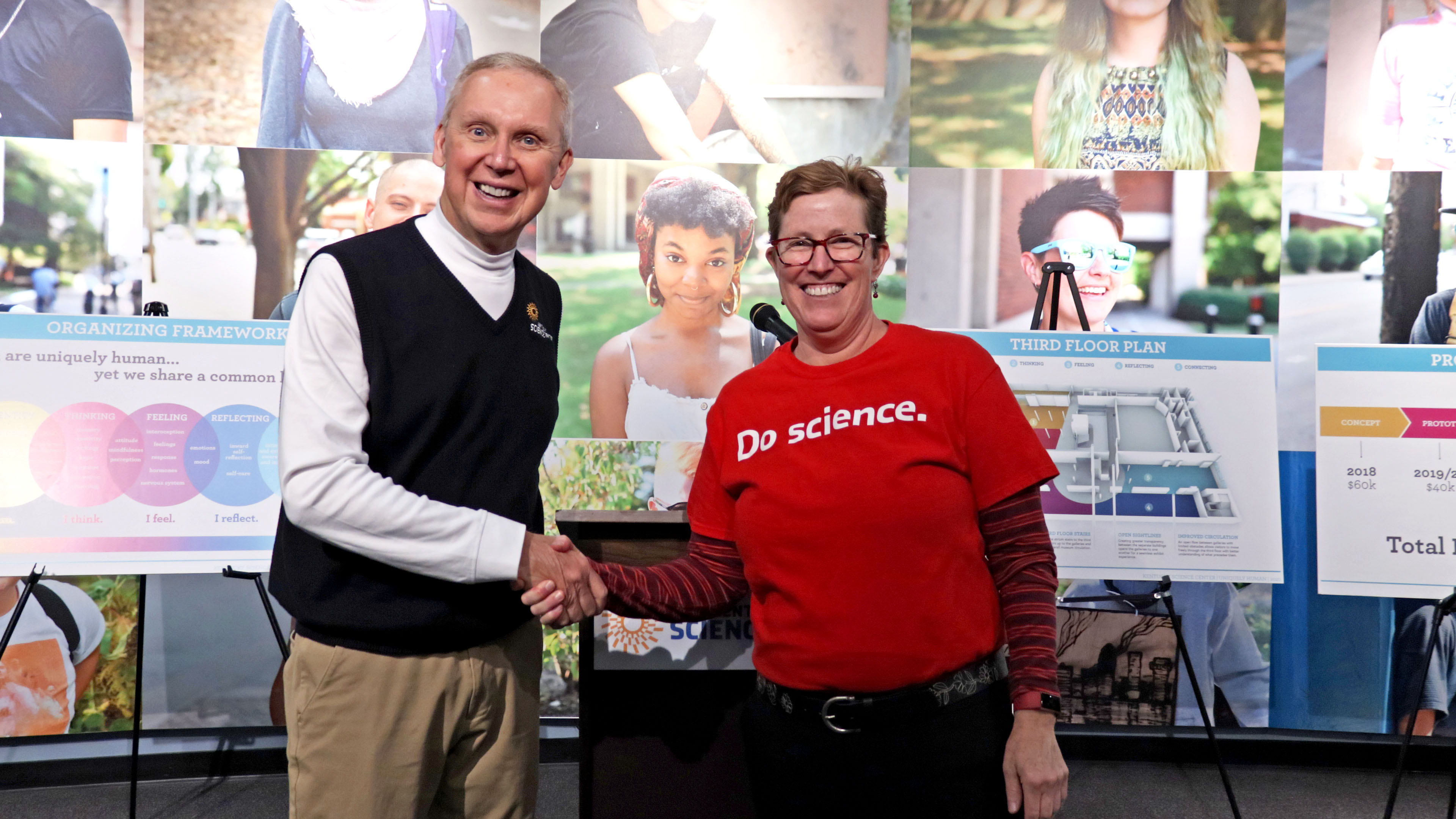 LOUISVILLE, Ky., February 26, 2020– Kentucky Science Center board of directors today announced a leadership change that reflects the organization’s innovative approach to doing business and doing science, and follows the path of its 3-year strategic plan, Full S.T.E.A.M. Ahead. Effective March 1st Mike Norman, current Chief Operating Officer, will succeed Jo Haas as the organization’s Chief Executive Officer. Haas, having served nearly 12 years in the top position, becomes Chief Creative Officer spearheading the completion of signature projects embedded in the strategic plan. “The board is so enthusiastic about this transition plan because it represents a strong, progressive bridge between present and future,” says Board Chair, Brad Seigel GM of Caesars Southern Indiana, “with an emphasis on the priority this organization has placed on growing professional talent at all levels.”

Norman started with Kentucky Science Center in 2011 after spending 11 years as Chief Audit Executive for Louisville Metro Government. As COO, he served as the senior business and operations leader for the science center with key responsibility for converting its IMAX Theater to a digital, 3D capable facility and designing sustainable business practices to support new revenue streams and rapid expansion of staff. He has experienced all aspects of the science center business from the ground up, which includes strong relationships with staff and board and an industry-wide perspective of the role of science centers around the globe. “I am passionate about the Science Center, it’s incredibly talented team, the work we do here and across the community, Commonwealth, and region. Our work is essential as we use science, technology, engineering, art and math as the platform for translating curiosity, connectivity, humanity and design thinking into a healthier, more inclusive, creative and workforce-ready region. I couldn’t be more honored to stand at the helm of a place that has such a rich history and a bright future.” Norman is the first native Louisvillian to be named CEO of Kentucky Science Center at its present Main Street location. He received his Master of Business Administration degree from the University of Louisville and is a proud graduate of Jefferson County Public Schools.

Under Haas’ charismatic leadership since 2008, Kentucky Science Center has experienced tremendous growth leading to expanded partnerships, increased audience and impact, and flourishing new revenue. She led the re-naming and rebranding in 2012 and has increased the center’s budget – and thereby service to the community – nearly $2 million during her tenure. Through savvy business-to-business connections and the cultivation of sustained relationships, Kentucky Science Center now reaches all 120 counties in Kentucky and 93% of Indiana counties each year. Haas also led the development of the nationally recognized Science in Play exhibit on the first floor of the flagship center, fully recasting how families with young children learn together and for life. Science in Play now travels Kentucky with two rotating exhibits, called Science in Play2Go, that reside in county libraries. “This has been the most amazing journey,” says Haas, “leading to a deep appreciation and commitment to this place, this team and Board, and all the people we serve. I am delighted that this transition offers me the chance to throw everything I have at several more cool and transformative projects!”

“These are the creative and entrepreneurial skills we are delighted to hold onto as Jo continues to offer energy and vision to our community and our Science Center while yielding the reins of the organization to its next-generation leader. Mike and Jo have worked together for nearly a decade and have a unique partnership that allows for this kind of powerful and strategic transition” says Seigel.  “The overlap between Jo and Mike ensures that we will be able to accomplish the goals of our strategic plan, Full S.T.E.A.M. Ahead, while providing Mike the freedom to develop relationships in his new role.”

Haas will spend the next two and a half years working on several keystone projects including the comprehensive $6 million renovation of the Science Center’s third floor and its Uniquely Human concept which has been developed collaboratively with community voices, local and international benchmarking, and professional creative support. 2020 will be spent in prototyping, evaluation, advisory and fundraising phases. The Center hopes to reach a fundraising goal of $1.5 million by the end of year in order to move to full-on design, development and fabrication. With all funds committed the project aims to be complete by 2022. Haas will also lead KSC’s work with Science in Play2Go, Waterfront Development Corporation’s Phase 4 park, PlayWorks, and spearhead My Big Little Adventure; a partnership with Bernheim Arboretum, Louisville Zoo, and Stage One Family Theater dedicated to expanding school readiness in Jefferson County.