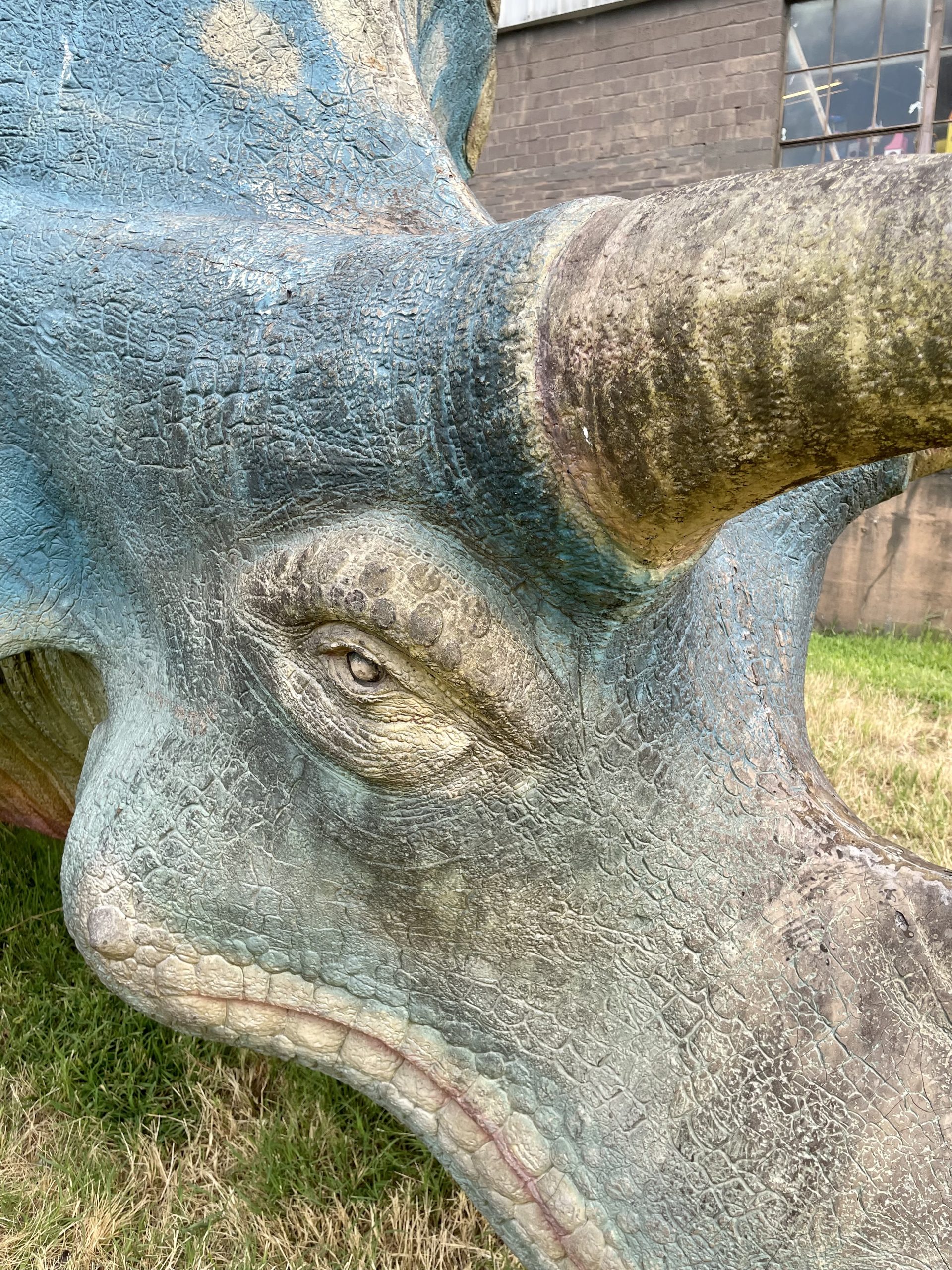 Created by Sinclair Oil along with eight other fiberglass dinosaur figures as part of the company’s 1964 New York World’s Fair display, the Triceratops first found a home in Louisville in 1970, appearing at the Louisville Zoo. In 1979, it made it’s move to the Kentucky Science Center (then known as the Museum of Natural History and Science) where the dinosaur greeted visitors to the Science Center’s West Washington Street parking lot. The Triceratops was moved to the Science Center’s warehouse in 2008 to protect it during construction of Museum Plaza project. When that project stalled, no funds were available for the repairs necessary to put the dinosaur back on display.

Kentucky Science Center was recently able to secure the funds needed to enable the dinosaur to be put back on public display.  To provide the dinosaur with additional protection from vehicles and Ohio River flooding on its return, it will be installed atop the parking lot elevator that gives guests access to the pedestrian pedway over West Washington Street.

“All of us at Kentucky Science Center are so excited to have the chance to refurbish our resident dinosaur and put it back on display for the people of Louisville,” says Chief Executive Officer Mike Norman. “From its new perch above West Washington Street the Triceratops will be the perfect welcoming committee, encouraging locals and visitors alike to Do Science with us.”

From today through Sunday, August 14th, the public is invited to help choose the dinosaur’s name: Cera, Lottie, or Topps.  Members of the public can make a donation in support of their favorite name on-site at Kentucky Science Center or by visiting kysciencecenter.org/triceratops.

The name that receives the most donations will be announced at a celebration in honor of the return of the dinosaur on Saturday, September 17. The Dino Day event will also feature dinosaur-themed activities and a costume contest. Guests can reserve their general admission tickets for the Dino Day event by visiting kysciencecenter.org/visit.

Kentucky Science Center is located at 727 W. Main Street on Louisville’s historic Museum Row and is open to the public seven days a week from 9:30AM to 5:00PM. Our 50,000 square feet of space allows families plenty of opportunity to explore, experiment, and Do Science. Guests can save $3 off the general admission price by purchasing tickets in advance. Secure your spot by visiting kysciencecenter.org.